Yesterday, I wrote about not adding that internal dialogue to things that happen; not telling yourself a story about something seen, done or said.  Today, I’m going back to that example, one in which somebody that you know – a friend or acquaintance – ‘blanks’ you on the street, causing emotional turmoil for hours/days/longer afterwards as you try to make sense of this person’s terrible behaviour.

Aside from the fact that it’s not very sensible to make yourself feel these awful, distressing emotions from such a minor event, it’s also not very fair to the other person.

Because you don’t have all the facts. Right?!

The only thing you know is that this person, that you know, failed to acknowledge you in a way that met your standards’ of acceptable social behaviour. That’s it.

When we tell ourselves this story about why we should be angry or upset about this foul treatment of us, this whole reaction is based upon the assumption that the person actually saw us and intentionally blanked us for some malicious reason. But we don’t know this! Some people have developed a fine art of looking like they’re paying attention – complete with nods and encouraging phrases – whilst actually being somewhere worlds’ away in their mind. My point is that sometimes people might look right at you, but not really see you.

Second point – let’s say that this person definitely did see you. You’re sure of it. As you develop your story of outraged indignation, you assume that this person could have no legitimate reason not to want to communicate with you. Therefore, they must have ignored you with malicious intent. Now… if this was someone that you’d actually had ‘beef’ with in the past, then of course this might be the case. But why would you jump to this conclusion, if you’re ignored by someone with whom you’ve never had a crossed word?! 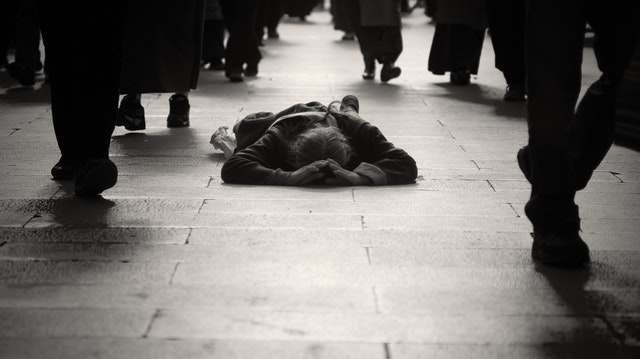 I want to finish with my own personal experiences, as a Social Anxiety sufferer and the person doing the ‘blanking’…

Throughout my battles with Social Anxiety, interactions like this were a major source of worry for me. I did blank people. Frequently. And intentionally. But it was never about the other person. It was because my brain had hardwired social interactions like this to panic, often resulting in panic attacks, so on days when I felt more fragile, I’d avoid these interactions. This then led to days, weeks and months of more guilt and misery, as I worried about being judged as rude/uncaring/arrogant, as well as the overwhelming sense that I’d let myself down. Even as I write this now, I can feel a bubble of anxiety in my stomach.

Part of the problem was that I was pretty high-functioning as far as SA sufferers go. As a teacher, I became increasingly adept at putting on an act and appearing to be social and confident in certain situations, especially at work. So it’s little wonder that people felt affronted when I blanked them. They’d fallen for my act. They assumed that I really was bubbly and confident and happy all of the time. They couldn’t recognise the difference when I was genuinely feeling this things; and when I was just holding it together, staying busy in the desperate hope that no one would ask me the dreaded question, “are you okay?” On days like this, as self-assured as I may have appeared, I avoided people because I didn’t know if I’d be able to respond to that question without tears.

Whatever situation you’re in, no matter what is said or done, take the advice from yesterday and ‘drop the story.’ Consider what you know and what you don’t, and just as a scientist would, don’t make judgements unless you have all of the facts.