As part of my business, Skills with Frills, I visit different schools and teach the fundamentals of wellbeing and creating happiness. An important part of this is about comparing ourselves to others, in which we look at Sylvia Duckworth’s Iceberg Illusion.

If you haven’t heard of it, the basic premise it that successful people represent the iceberg that we see above water. Below the surface – which we don’t see of course – are things like hard work, sacrifice, problems, loss, failure, resilience… 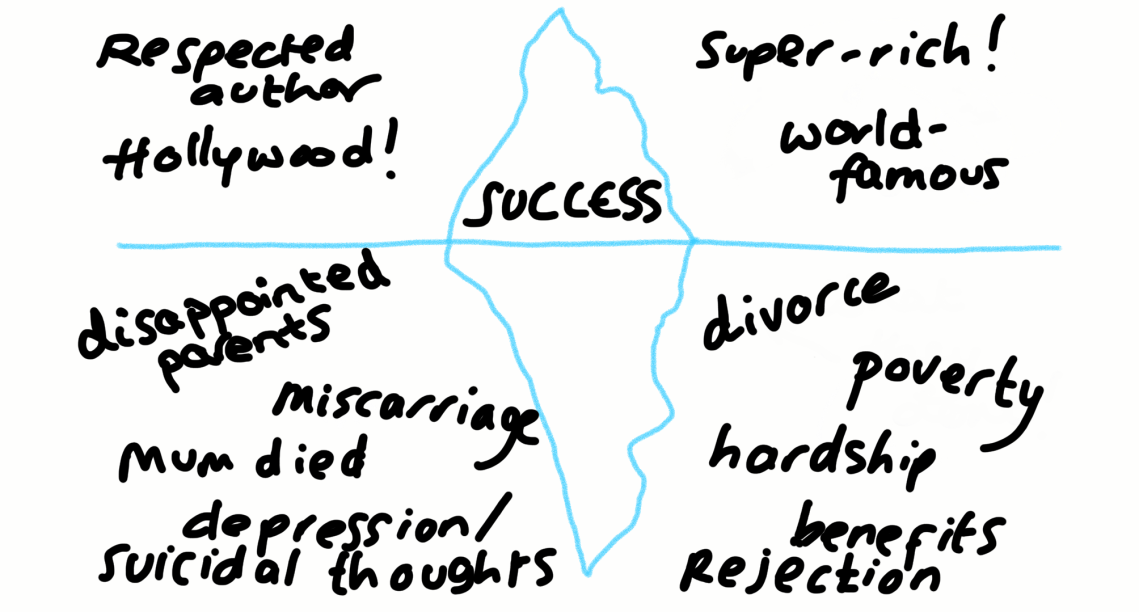 When teaching this to children, I provide the example above. At this stage in the workshop, we’ve already looked at J.K.Rowling. As a world-famous, super-rich author of books that children love, she’s someone who children know to be ‘successful’ in a way that they can understand.

I don’t tell them that this is her Iceberg by the way. I let them work this out for themselves. And they’re often shocked and fascinated as we talk through the problems that she faced before she was a ‘success.’ To think that at one point, one of the most high-achieving people they know of, was living on benefits and in such a deep depression that her thoughts turned to suicide, really complicates their idea of what a successful, rich, famous person is.

This is a great message for children, but it’s just as useful for adults. I’ve spoken before about the danger of assuming your role models are superhuman and this is an extension of that same concept. It’s easy to look at what’s on the surface, but you can’t assume anything about what’s beneath it.

Some of the most successful people have suffered the greatest battles, whether this is due to actual life circumstances or mental health problems, or both.

High-functioning anxiety-sufferers are everywhere, many of them having risen to great heights.

But don’t assume because they’re at the top of the mountain, that they haven’t had a terrifying, arduous climb to get there; that they haven’t sacrificed, lost and failed along the way; that despite all appearances they don’t have to use tremendous energy every single day, just to stand still, avoid stumbling and do things that many people take for granted.

Have you used the Iceberg Illusion before? Do you find yourself idolizing people without knowing what they’re really about? Or have you been surprised to learn things about people whom you consider to be naturally confident and successful? Thoughts welcome: